My daughter sings Tina Karol's song about Ukraine all the time… 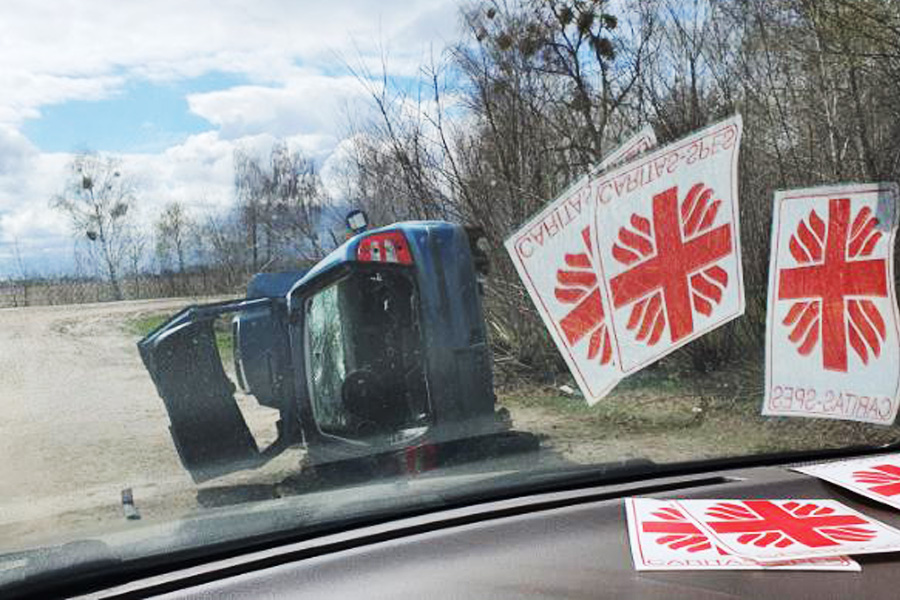 The girl mentioned in the title was able to grow up peacefully in the Sumy region, prepare for school and delight the whole family with singing her favorite Ukrainian songs. However, unfortunately, the 5-year-old kid and her mother, Mrs. Marina, had to face the horrors of Ukrainian-Russian war. Caritas Spes Ukraine has helped the mother and child get out of the war zone and find comfortable temporary housing in sunny Italy.

Mrs. Marina and her daughter come from Lebedivka, Odessa region. Their life was difficult even before the war: the child has an autism spectrum disorder. However, the family managed to cope on their own. "On February 23, I met with a friend, made plans and dreamed of the future. My daughter went through a specialized training and rehabilitation program, and I had my own small online clothing store,” said Ms. Marina. "But the next day, when Russia invaded Ukraine, turned our whole life upside down ..."

If even ordinary children find it difficult to hide from enemy shelling and bombing, it is much more difficult for parents with autistic children. "The hardest thing was to go down to the basement with her. Sometimes we ran and sat there for 3-4 hours several times a night, so it was necessary to dress her warmly. And she fights back, she's afraid to go, she doesn't want to." Not surprisingly, Ms. Marina was hesitant at first about whether to go somewhere. It is not known how a girl with such developmental disabilities would perceive moving and changing the environment, how it could affect her well-being. However, one night put an end to my hesitations as a mother.

"For some reason there was no siren that night. I heard the sound of an airplane, very close. I will never forget it. I grabbed my daughter and ran to the bathroom, because we would not have time to go to the basement. Then such a deaf "bah-bah" several times ... All the windows in the entrance flew… ". In the morning, the family was ready to leave. God helped with this by sending them a real guardian angel from Caritas-Spes Ukraine - project manager Mira Milavets. Through many of her efforts and with the spiritual support of the Greek Catholic Father Vladislav Maryna and her daughter reached Lviv via Gadyach and Poltava. Caritas-Spes staff and volunteers did not leave the family during their trip across Ukraine. Sometimes, Mira recalls, they kept in touch even at night, dispelling fear with kind words and making refugees feel better.

"Everyone helped us along the way, but the most valuable thing was that the girls from Caritas were in touch all the time," says Ms. Marina. – “They supported me, told me what to do and where to go, I would not have managed. Caritas helped with finding transport, housing, so that there was a place to stop and rest, because such a long way is impossible without support." The road was not easy, especially for a vulnerable and sensitive child. But the result was worth the effort. Now Marina with her little one are in Italy, safe and well. The woman shares her feelings in a new place: “Daughter understands everything that is happening, she sings Tina Karol's song about Ukraine all the time… My mother stayed in her homeland, my heart aches for her, for our country. Today my mother said that she had breakfast with kefir and jam, because there is nothing more… ».

Caritas-Spes Ukraine has been supporting people in the most difficult periods of their lives for more than 25 years. Since the beginning of the Russian invasion, the organization's workers and volunteers have helped hundreds of people from Kharkiv, Sumy, Mariupol, Berdyansk and other war-torn areas find a new safe home. The Mission also provides humanitarian assistance to Ukrainians who did not want to leave their homeland. This is possible only with the support of caring people from around the world.

Join our Mission with all possible help.

In order to maintain the confidentiality of the names of participants and the names of settlements where they live, may be changed.