"It felt like the earth was shaking under us": the war story of a deaf couple 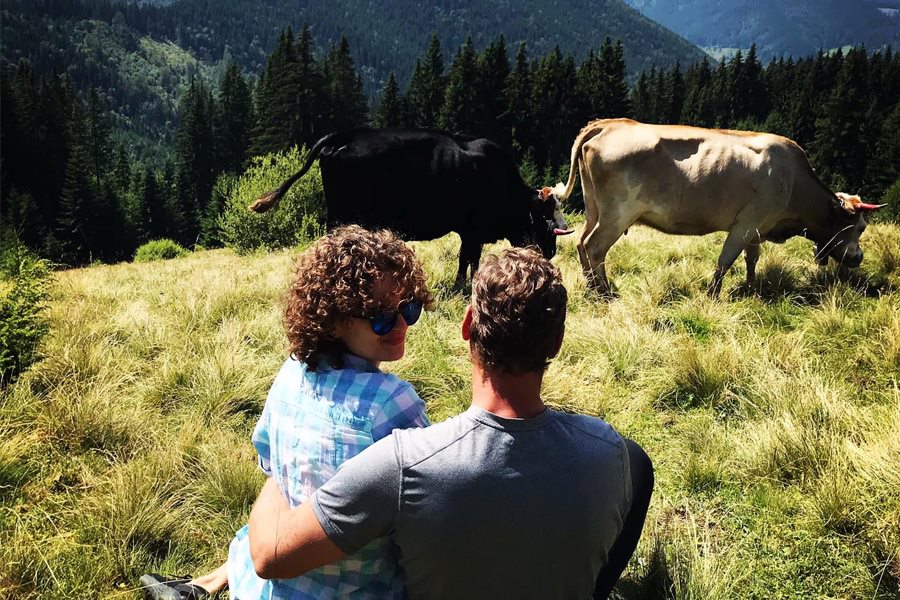 Imagine a world without sounds. You can't hear speeches, music, birdsong, news, sirens, explosions. In normal times, not being able to hear means perceiving the world in a different way, by touch, smells and colors, but during the war it means not having a chance to survive. The war further exacerbated the isolation and alienation of hearing-impaired people and increased the danger to their lives. First of all, the problem is the unavailability of air alert information, because they do not hear sirens or phone app signals. Disconnection of the city from the Internet is a complete lack of information for them on what is happening around. Imagine you feel explosions and vibrations inside of you,, you see people running around, crying, but you don't know what happened.

When the couple Yurii and Olha arrived at one of the "Caritas-Spes" centers for displaced persons, they immediately attracted attention, being young, beautiful and always polite. We started communicating through correspondence, using simple phrases. They told us they were from Mariupol, told how they managed to escape from the occupation and how the Lord led them out of the war-torn city. With the help of a sign language interpreter from the Ukrainian Society of the Deaf, we were able to talk to Olha and Yurii, who shared with us their story, feelings and pain.

Being able to hear from birth, Olha and Yurii lost their hearing in early childhood. Having lived all their lives in Mariupol, they remember the silent events of the seizure of Crimea and riots in the city. The couple learned about the start of a full-scale war on February 24 from work colleagues who wrote to them not to go outside because of the danger. They did not hear the sirens and only felt the vibrations from the bombings.

Olha's father assured them that everything would be fine, but just in case, he helped pack things and invited them to live with him. "Dad said that the road would be difficult and it may be impossible to leave the city. There were long queues for gasoline in the city from the first days of the war, no one could withdraw cash from ATMs, and shops were empty. Their parents were running out of food - there were only some cereals, sweets and meat in the freezer left," says Olha (through interpreter).

Events in the city developed rapidly: daily bombings, water cuts, on February 28, electricity started to fail, and the Internet stopped working. On March 3, there were problems with the gas supply. The couple felt all other news only with their bodies and vibrations. Sometimes the vibrations seemed to continue endlessly. It felt like the earth was shaking.

"I can't hear at all, whereas Yura can hear only very loud sounds. At least I could sleep at night. Of course, I felt the walls shaking, saw my dad being so upset, understood that something absolutely terrible was happening, but I was able to sleep. Yura couldn't sleep even at night because heard the bombing," Olha continues.

In mid-March, Olha's father convinced them to break out of Mariupol. With no "green corridors", hitting the road meant going nowhere. The couple set off with their hearing friends in two cars.

"We packed our winter clothes, food and water. All our belongings were left in our apartment. While driving, there were loud explosions on the road. We saw drones dropping bombs on houses, as well as destroyed and empty pharmacies, shops and a lot of broken military equipment. We drove through a number of roadblocks where our documents were carefully checked. The military saw that Yura was deaf and let him go. While passing through Manhush, we saw the DPR flag.

We wanted to go to Zaporizhzhia, where Yurii's sister lives, but when the Internet appeared, she wrote that hostilities were taking place 20 km from them. We managed to get to Dnipro by detours through Polohy, and in the morning we left for the Bilotserkiv district," Olha described their evacuation in fragments.

Sign language is different from the language used by hearing people. It is devoid of imagery and built on facts. The biggest problem for people with hearing impairment is communication with the world around them. With modern digital capabilities, it has become easier, but the lack of the Internet plunges such people into an information vacuum. Olha shared that her several colleagues with hearing impairments died because of not hearing the air raid, and there are some others with whom she hasn't been in touch up till now.

The fact that the couple managed to get out of Mariupol is a real miracle. Yurii said he saw how nervous his father-in-law was while talking to the Russian military at every checkpoint. He saw his lips turning white and his hands trembling. But when he explained that he had two people with hearing disabilities in his car, they let us go. When the couple arrived at their friends' place in Khmelnytskyi, Yurii could not sleep. The fear of explosions was so strong that he could not believe that it was safe there.

Together with Olha's father, the couple spent a month in Khmelnytskyi region, where they received certificates of internally displaced persons. Our heroes said they were uncomfortable because they wanted to work and thank the people for accepting them. It was decided to go to Kolomyia, where they were sheltered by refugees with hearing impairments from Kyiv and Boyarka. Having struggled with finding an apartment for two weeks, the couple went to Ivano-Frankivsk and turned to the Ukrainian Society of the Deaf, which contacted Caritas-Spes.

"We are believers, Pentecostals. We kept on praying on the road and reading Bible. We knew there would be wars and an end of time. But the Lord led us," said Olha.

"We learned to read lips and communicate with people in a new city. Our psychology is different from the psychology of hearing people. We construct sentences differently, we do not inflect words. Our speech apparatus is underdeveloped, as we lost our hearing at the very early age. It is difficult for us to get a job, to go to the doctor. We have to be followed by a sign language interpreter everywhere. The society provides us with free services — interpreter accompanies us to the Administrative Services Center, for example, or helps us get along during some emergencies," added Yurii.

He also mentioned their settled life in Mariupol. He worked at Azovstal as a fattler (it is hard work, and people with hearing impairments are hired in such workshops, because it is very noisy there), and Olha sewed evening and wedding dresses. They had their own life, communication in the community. The man also told how he met his future wife at a beauty contest, which Olha won. Their eyes glowed when the couple talked about their live in the past. Their outlook for the future is pretty uncertain though.

"We have nowhere to return. Our city actually no longer exists. Now there is an occupation and complete ruin. I learned to drive a car and have my driving license, but it is a problem for us even to cross the border, because we cannot hear. Only God knows what lies ahead. I used to be in fond of sports. I have three bicycles actually and participated in marathons... When leaving, I was able to take my bike with me, but I haven't ridden yet, as I left it at my friend's place.

We planned to take part in a bicycle marathon in Kyiv in June, but the war changed everything," Yurii added.

When we spoke with the couple, they were in the Caritas-Spes Yablunytsia Center, currently the couple is in Germany. They say it is difficult for them to make plans for the future, but they are quite sure that they want peace and for Ukraine to move towards the European Union. The war broke into their lives, and they "heard" it in their own way.