‘We’re not alone! This is the most powerful message I’m bringing to Ukraine’, Father Vyacheslav Grinevich on meeting Pope Francis at the Caritas Internationalis press conference 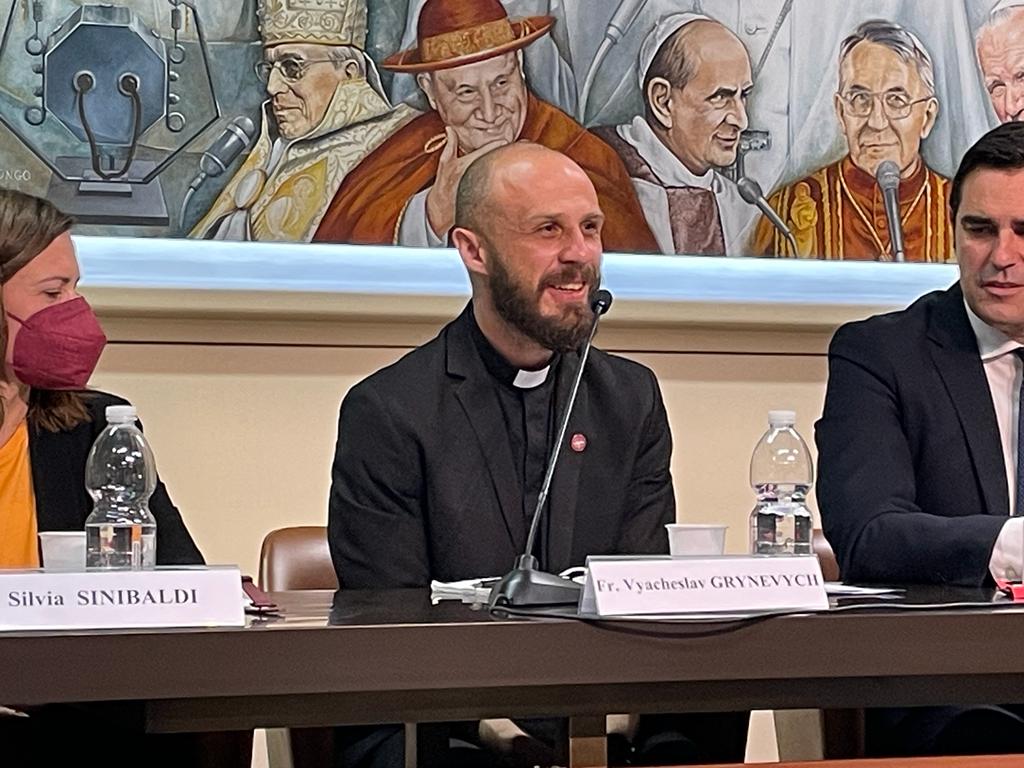 On 16 May, on the occasion of the official visit of Vyacheslav Grinevich SAC, Secretary General of Caritas-Spes Ukraine, and Tetiana Stavnycha, President of Caritas Ukraine, to Rome, Caritas Internationalis organised a press conference to discuss the work of Caritas Confederation and the humanitarian situation in Ukraine. Among the speakers were Aloysius John, Secretary General of Caritas Internationalis, and Silvia Sinibaldi, International Cooperation & Humanitarian Director at Caritas Europa. The journalists who visited our country during the war were also present there and could ask Ukraine’s speakers their questions.

The Secretary General of Caritas Internationalis was the first to tell about the Caritas humanitarian assistance in Ukraine and the work of the network on providing IDPs and refugees from Ukraine with their rights. He also emphasised that all Caritas organisations in the neighbouring states, which are Poland, Hungary, Czechia, Slovakia, Romania and Moldova, are providing assistance to millions of refugees fleeing the war. Aloysius John cited the data and stressed that there is a real story of a person behind each figure. ‘On 24 February the lives of Ukrainians turned into a nightmare. 82 days gone, the Ukrainians are still in the state of vagueness and violence. Children, mothers, elderly people, foreign students who lived in Ukraine have been forced to flee. The outbreak of violence has caused 13 million Ukrainians (30% of the population) to leave their homes and become refugees and IDPs, with 1.5 million of them being children. 229 children have been killed. Massive damages of buildings, infrastructure and over 160 churches. Ukraine will require 600 million dollars to rebuild the state’, claimed Aloysius.

The Secretary General emphasised that the humanitarian consequences of the war, especially for the poverty-stricken, will have a global impact on the whole world, ‘This war underlines the condition of the poor, because these sections of the population are the most vulnerable. The least developed countries will be affected the most. In March I visited Syria, where the people felt the consequences, with costs for bread being enormous. Many Caritas organisations in Africa, Asia, Latin America have already reported the poor having problems with bread. The poorest people will pay the highest price. The money must be invested into promoting a decent life for the poor, not into killings and destruction’, stated Aloysius. 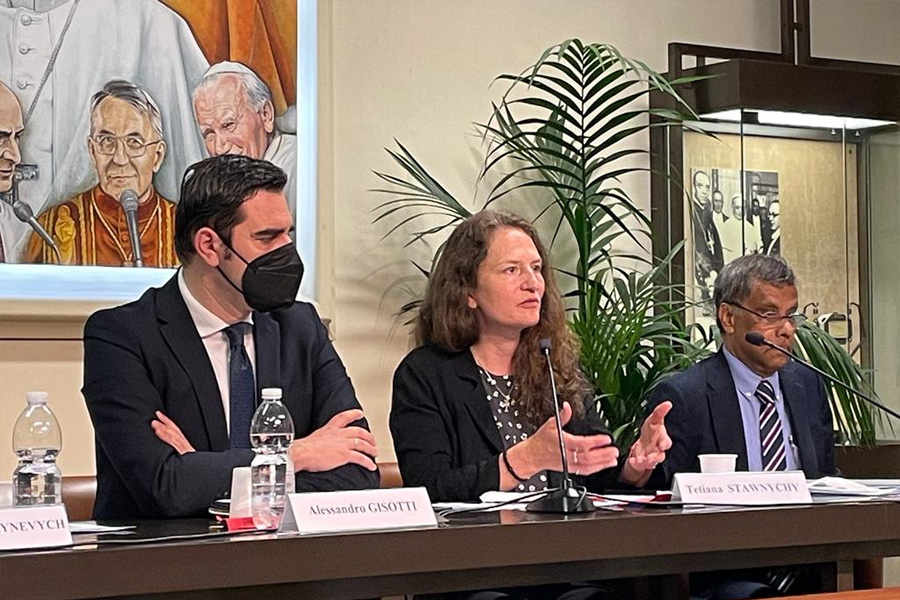 Tetiana Stavnycha, President of Caritas Ukraine, said that the ability to respond to such a terrible crisis in such a short period of time is about people, love and solidarity. Solidarity in Ukraine dwells in every person who works for Caritas, every volunteer who has started to join the organisation since the first day of the war. Tetiana stressed that not only local volunteers are helping her, but also IDPs who have been sheltered and given assistance in Caritas centres, ‘People receive presents filled with love and dignity along with food, hygiene items etc. They want to return to this place. I had a chance to meet an internally displaced woman from Kolomya. She told me she’d been to different centres but when she came to the Caritas centre, she felt like being surrounded by love. She keeps on coming to the centre every day and talks to other IDPs and now sees her vocation in this. On the one hand, a war is a movement of chaos and destruction. On the other, the world resisting them is love, solidarity and care. That restores the people’s unity’.

Father Vyacheslav Grinevich SAC, expressed his gratitude to the journalists present at the press conference for their continued share of the truth despite the difficulties, coming across terrible figures of human casualties, ‘Indeed, a human face is behind each figure. When assisting people, we can see a lot of reflections of their souls. These images are complicated and cannot be improved with just some humanitarian aid. This is a long-term perspective. And being a Caritas family, as Church, we must support the people’.

Father Vyacheslav Grinevich paid special attention to the issue of family separation during the war. ‘When we think of families, women with children are on our mind in the first place. We don’t forget our soldiers either. What will happen when such families get back to normal life? When reunited with their families, fathers will be other men who know war and death. That’ll be another problem. We’re thinking about that, preparing our programmes and activities for that. During the war it’s also impossible to get good education, with children understanding that a city’s occupied and that their fathers are at war.

The question is: who will be our doctors, our teachers and our leaders? We’re also thinking about that’, said Father Vyacheslav. Father Vyacheslav also replied to a journalist’s question about the staff security and the conveyance of humanitarian assistance, ‘The problem with war is that we can’t be sure where exactly it’ll be safe. We can arrange the deliveries, prepare safety instructions for volunteers but we cannot make sure the people are safe. We have a centre in the occupied area. We offered evacuation to the people. They refused it, claiming it was their Mission. On the one hand, it’s heroism. On the other, it’s hard for me to bless it because I’m worried about the consequences’.

Father Vyacheslav Grinevich also told us about his visit to Kharkiv where he witnessed amazing self-organisation of the locals who have been living in the underground for three months. The people have accommodated the metro carriages and are trying to have a normal life, including studies and leisure activities. ‘I visited one place where people are living in the underground. Their way of life there is simply amazing. There’s a kind of a head at every station, a food spot, even a cinema club. The people are living in the carriages and can communicate with other heads at the stations. When in need of sugar, for instance, they walk through the tunnel and exchange something for it. I saw pregnant women there, too. On the one hand, it’s terrible when a baby’s born in the underground. On the other, it shows the beauty of the human soul. I’m happy to see these faces and eyes.

It’s difficult to imagine the end of the war’, added Father Vyacheslav. ‘I don’t believe the war will end just by concluding a peace treaty. The war will only end when we are able to forgive all those terrible things we’ve witnessed; when we rebuild not only our homes but also restore our souls and memories. What’s most difficult is that the pictures of war will be flashing through our minds all our life. However, I realise that Church, love and hope are remedies. We can share these remedies with people who are close to us’.

To the question about the subject of Pope Francis’s conversation with the heads of Caritas organisations operating in Ukraine, Father Vyacheslav stated that the meeting with the Holy Father was a great sign, ‘We mainly talked about people, faces that expressed our experience. The Pope, instead, shared his experience with us. I know it’s rather difficult to visit Ukraine. But Pope Francis expressed a lot of signs of his care. The National Flag of Ukraine is not just a flag for him. For us, the visits of two of his cardinals to Ukraine became the sign of support. I told him that our bishops and priests became the volunteers for Caritas, with centres of humanitarian assistance placed in the churches. Having heard our organisations working from dawn to dusk, doing their best, the Holy Father blessed us with his words, ‘That is exactly my point!’ I’m bringing the words of hope and support to Ukraine. That underlines our humanity. This is the face of our Church and our reality. We’re not alone! This is the most powerful message I’m bringing to Ukraine’, said Father Vyacheslav Grinevich SAC at the end of the press conference. 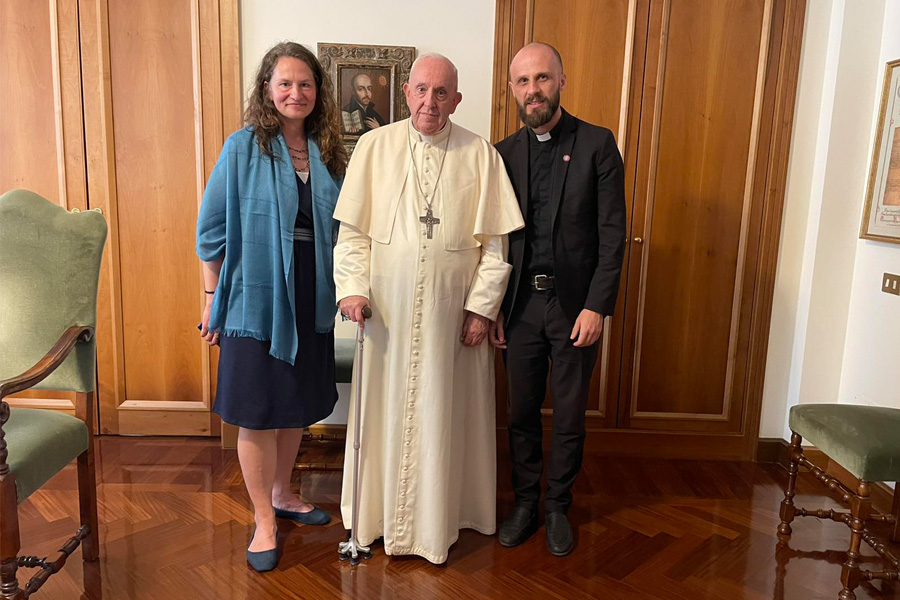 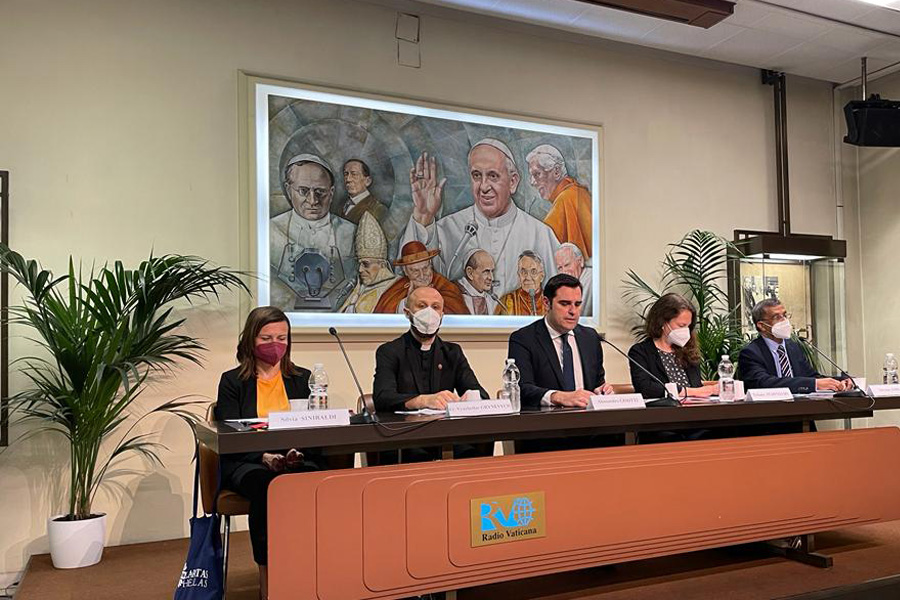