"If it weren't for the Lord, we would be at the very epicenter of hell" - stories of daughter and mother from Kyiv 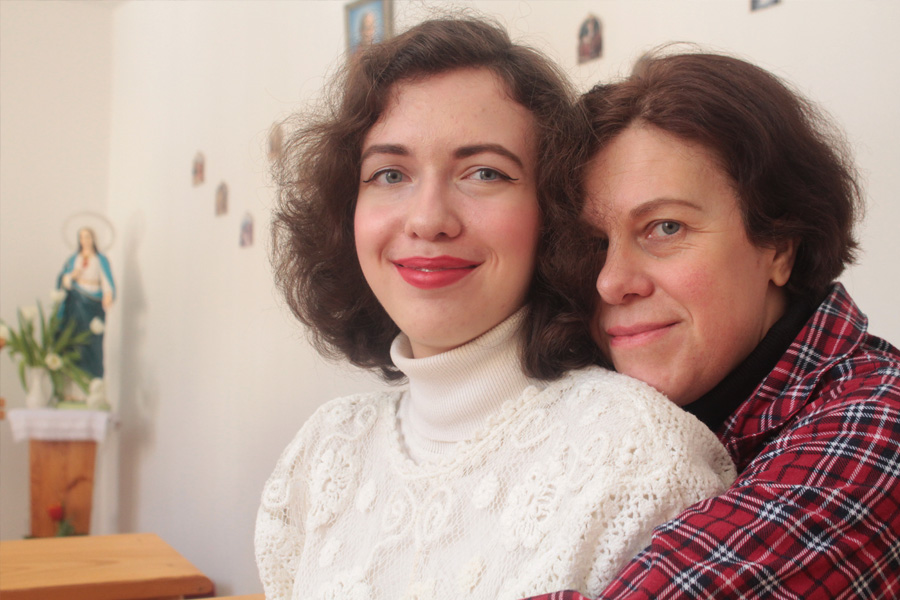 February 24, 2022. The day when the life was divided into before and after. The events of that day became a point of no return. That day I woke up at 7 am from the alarm clock with a feeling of imminent trouble. After reading the messenger, I realized that the war had begun. But I was lucky not to hear shelling during the sleep.

Fellow from my studies who lived near the site of shelling were terribly frightened. I was terrified and numb. My parents were still asleep when I woke them up - they couldn't believe it. I desperately asked them to pack up and leave immediately, but they didn't want to. I persuaded my parents to go to Vorzel's country house, but the Lord saved us. My father is a teacher who was called to work to set up a bomb shelter at school. My mother asked him to leave earlier and leave for the country house soon, but God's providence saved us from this quick decision again. If Dad hadn't stayed at schools for longer, we would have appeared to be at the very epicenter of hell and it is unknown whether we would have survived. When I ran out into the street, there was fog, grayness and a lot of people running to pharmacy. My mother recalled the time of the collapse of Soviet Union with long queues. People were terrified and just asking "how are you?!". The same was in the store. I remember an elderly woman steadfastly answering that she had survived World War II and would survive this one as well.

At home I shuddered at every sound, at every siren. And every time I thought whether it is not too late to run to bomb shelter. We understood that staying in Kyiv was very dangerous, so we decided to go to a safe place. We knew about the Caritas Spes Center, but we didn't leave right away, we were afraid of both, to stay and to go. The way was difficult. The devastated streets of Kyiv have been replaced by long traffic jams. But with each checkpoint, there was a strong sense that we were safe, and our country is well protected.

Arriving to western Ukraine on the 3rd day of the war, we sighed with relief. It felt as if we were in another country that had escaped sirens, shelling and explosions.

In this place we gradually calmed down. We were overwhelmed with anxiety. My mother and I wanted to volunteer to be useful to others at this difficult time. We are just getting to know the audience, but listening to each story, we realized that we are not alone. The war broke out unsolicited.

Through the eyes of the mother:

February 24, 2022, everyone will remember forever. The day when the war has begun. My daughter and I went to the pharmacy, then to the store, there were crazy queues everywhere. People were scared, confused. Products were quickly disassembled. Thus passed the first day of the war. Sleepless night thinking about what awaits us. And then the second, third, and further days… Rocket bombings, alarming sirens, empty store shelves, frightened people's eyes... It seems to me that even the air was permeated with anxiety. And then the nights in the underground parking started. It was scary and cold. We couldn't sit there all night. The legs and the whole body ached from cold. The elevators were turned off in the house, and when the siren sounded, we grabbed our suitcases and ran down the stairs to the shelter each time for 10 days. Of course, we all rallied, supported each other, but the alarming sirens continued, the explosions became more frequent. And when the rocket exploded in front of my eyes and hit the TV tower, I realized that I had to decide and take responsibility for my family.

Our friends and neighbors have already left. The building was empty. We shuddered at every sound. The nights were sleepless, and we finally decided to go to a safer place. The Lord brought us to the Caritas Spes Center. Above all, this is a spiritual place where I can always attend the liturgy and pray in the chapel. This is very important to me. A different program has been prepared for us here. This is where we felt safe, relax and sleep. We are very grateful to Caritas Spes Mission, all the wonderful staff, the nuns and especially Sister Camilla for their kind heart. They do everything for us to make us feel a little bit at home.

The ‘Caritas-Spes Ukraine’ Mission has provided 19,196 people with shelter since the beginning of the Russian invasion. Our assistance continues. Help us help others.